All products are designed and shipped from my studio in Peoria, IL, and orders are generally shipped within 24 hours. Being a small 1-2 person operation, most items are made in small batches. If you're looking for more of a particular item, or there's something you've seen at an event that's not currently in stock, use the contact form to request a special order. I also still run my shop on Etsy as well.

I also offer many of my designs through other manufacturers. Visit Spoonflower for music and instrument fabric, and my Zazzle shop for other fun things like blankets, pillows, senior recital invitations, and more. 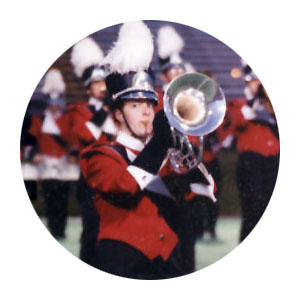 Once upon a time, in the 80s (my favorite decade), I was just a little fifth grade band beginning clarinet player. Armed with my plastic clarinet (a Vito!), I entered the world of capes and gloves and gauntlets and shakos, not really having any idea what I was getting in to. For most of junior high, I was fairly meh about band. I played a clarinet and it was okay.

High school was looming, and I had decided to quit band. Until the day when the nice band director (if you're reading this, you know who you are!) at the high school called my house to talk to my mom. "He sounds like a character." she said. So, I decided to stick it out a while longer.

In high school, I discovered the world of competitive marching band, said goodbye to the clarinet, and hello to the mellophone and french horn.

Then, four years after I had almost quit band, I drove down I-74 to Illinois State University where I spent four (okay, five) years in the Big Red Marching Machine, Wind Symphony, orchestra, pep band, and recorder ensemble (LOL).

Later on in life, I started designing things for band geeks like myself, and selling my designs on the internet webs.

I opened a shop on Etsy, and we began setting up at local marching band competitions and traveling to events and conventions such as BOA, TMEA, WMEA, and PMEA.

Thankfully, the days of changing clothes on the band bus are over (yay for adulting!), but I still love designing fun things for marching band and musicians, usually with the "help" of my overpaid assistants (the four-legged kind).